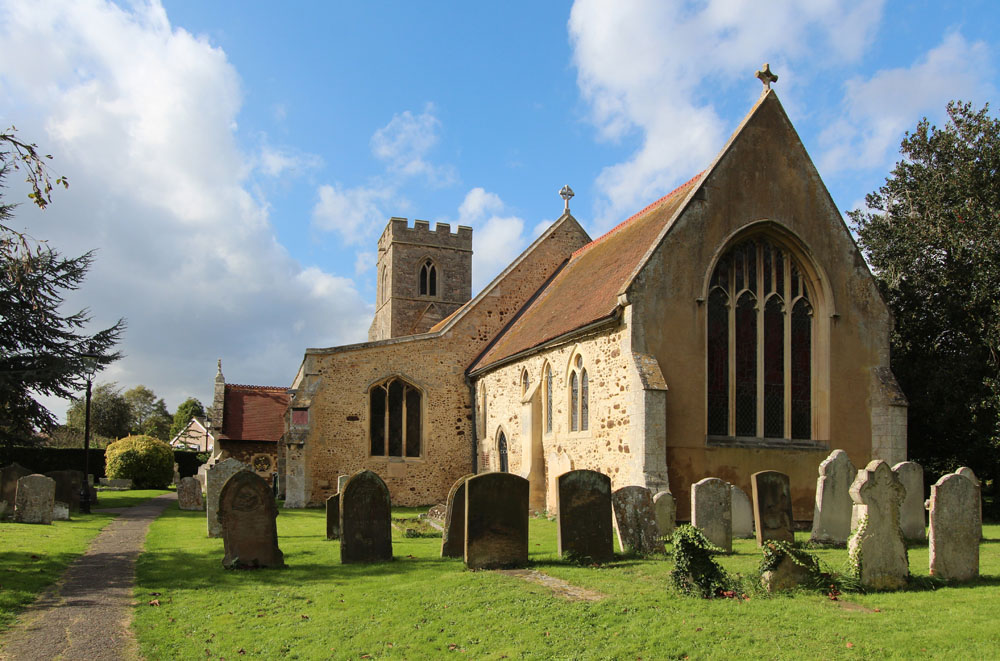 O how aimiable are Thy dwellings, Thou Lord of Hosts.Psalm 84

Six or seven centuries ago there was a much smaller church, of which the font survives. Norman, 1066-1150,and used for infant baptism, more appropriate in our climate than immersion. The round pillars may be Norman, although with later capitals and pedestals.

The next style, Early English, 1100-1150, with lancet windows, is found in the north and south sides of the chancel, where the Holy Table is. One of them bears the Arms of Queens\’ College which purchased the manor and church in about 1557 and \’present\’ the priest, often an old Queen\’s man with the living.

The windows of the North Aisle are Perpendicular with mullions designed for verticality, 1300-1450; one has a bit of ancient glass, possibly showing St. John.”

Against the north wall are some panels of the rood screen which held aloft a crucifix in the chancel arch. The saints in it have long faded and could well be replaced with modern ones.

Are you, perhaps, a pillar of your church and would deserve a niche in history?

The Memorial of both world and later wars is in the North Aisle and we have a special regard for the Air Force who flew so many Lancasters from the airfield on the north side of our parish.

In front of the war memorial is a stone coffin, possibly of thirteenth century. When the church foundations were reinforced in 1839, it was found three feet down under the mysterious arches built into the south wall. The design is a \’cross crosslet and a double caduceus united by a single stem\’. A caduceus is an ancient heralds wand, especially as carried by the messanger-god Mercurius (see Acts 14.12).

Only bones and teeth were found in the coffin and reverently re-interred.

We are not sure about the other two lids. it seems likely that chipping away at these sarcophagi gave masons a job in lean times.

The East window as well as those of the North Aisle is perpendicular. Reading from your left to right, the figures are St. Margaret of Antioch, favourite saint of Margaret of Anjou, first foundress of Queens\’ College, second St. Andrew, third St. Etheldra, Queen and saint, foundress of Ely Cathedral, fourth St. Bernard of Clairvaux. Queens\’ College was a development of a student hostel dedicated in his name: the figures were modelled on the Vicar\’s family, the Searles.

The South Aisle, once a chapel with its piscina for lustrations (washing of holy vessels), has Tudor style windows 1450 onwards, into the renaissance styles. There is some good modern glass. If you look carefully at the St. George you will see in one of the diamond panes a child St. George, reminding us of the hymn \’we are but little children weak…\’

When deep within our swelling hearts,

The thoughts of pride and anger rise,

When bitter words are on our tongues

And tears of passion in our eyes,

Then we may stay the angry blow,

Then we may check the hasty word,

Give gently answers back again,

And fight a battle for our Lord.

A walk round the outside of the church, will help you to visualize a much smaller church with high pitched thatched roof and smaller and lower windows whose outlines can be seen north and south of the sanctuary and on the west wall of the south aisle.

These are to be seen in an enclosure beyond the yew tree on the north east corner of the churchyard through a marked gate.

They were contemporaries of John Bunyan the great “tinker out of Bedford”, and like him were in and out of prison; but unlike him were Cambridge trained clergy who refused to take the Oath of Allegiance in 1662.

They used to be let out of goal at night and would preach to thousands at secret glades in the woods round here.

It was said that anyone who reads the Bible, Shakespeare, and Bunyan\’s Pilgrims Progress was a well read person.